Pretty much the only way I’ve ever become better at something is by being terrible at it first. I began making terrible websites in 2009, and a few months later I graduated to building mediocre web apps.

Here’s my first one…

I called my site Likeroll and imagined it as a StumbleUpon for Facebook pages. Every time you loaded the site, it would display a random Facebook page with a short blurb and a like button. You could press “roll” to see another random result. I don’t own the domain now.

Likeroll was the first website I promoted. I submitted the site to a blog called Killer Startups and they featured it a few days later. A few people submitted their Facebook pages to the database. A web designer from Spain saw the post and reviewed Likeroll on a blog for Universitat Autònoma de Barcelona, saying he liked how simple it was.

Here are some examples of what I learned:

Here is the Spanish guy’s review: 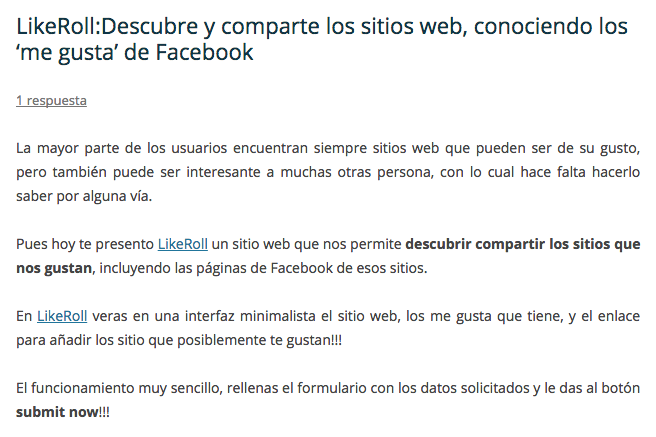 And here is the Google translated version:

Most users will always find websites that can be of your taste, but can also be interesting to many other people, which do need to know some way.

The very simple operation, you fill out the form with the information requested and hit the submit button now !!!
– Gustavo Martínez