The second search was my name.

But today, you can easily find most of what you are looking for. Exception: the occupation of lottery winners. Over the years I’ve tried the name search again, and found some of the more interesting folks that I share a name with.

This post is an homage to name twins, and features several of mine in the order I’ve discovered them.

Michael Alexis is a pro football player from the UK. He was born January 2, 1985 in Oxford, England; just 3 months before me and 5720 km away (the Atlantic Ocean is very big).

Michael has played for a bunch of football clubs including North Leigh, Aldershot, Burton Albion, Forest Green Rovers, Oxford United, Oxford City and Abingdon United. If you understand soccer better than I do then you can examine some of his player stats.

Here is Michael’s biography from the North Leigh profile:

A welcomed new signing this season. Michael is a powerful central midfielder and is able to dictate games with an excellent range of passing. Michael gets forward and joins in attacks and has a powerful strike that leads to many attempts on goal and chips in with with his fair share from the middle of the park. Welcome aboard Michael

Another similarity between Michael and I is that we both broke a leg playing football. When I was 13 I broke my leg playing American Football, and from this poorly written Oxford Mail article it appears Michael broke his leg playing English football in his early 20s. Breaking your leg is a huge setback.

Interesting bit of etymology: the word soccer is actually a British invention that Americans adopted. It was university slang for “Assoc.” from Football Association, with “-er” tacked on for completion.

Michael Alexis is a Skater Musician from Florida. He was a founding member of the Funky Groovy Caterpillars before going solo, and is a competitive skateboarder.

 Like Michael Alexis and myself, Michael Alexis suffered a fractured bone from his activities. In Michael’s case his injury was a fractured wrist from skateboarding. “It certainly made a doctor happy, thirty thousand dollars later.”

Michael’s comment about his medical fees is tongue-in-cheek, and I don’t know anything about his personal finances, but an unexpected $30,000 expense is crippling for most people. Reading about Michael’s experience was a sobering reminder how fortunate Canadians are to have universal health care, even with its many flaws. When I broke my leg as a teenager, my family was living at or below the poverty line for Canada. A $30,000 expense would have crushed us.

Michael is a talented musician with a unique style. It’s really hard to find his music now or even a profile for him, but this is a song I downloaded back in 2009:

Michael was also a founding member of the Funky Groovy Caterpillars, a rap funk group from Tampa Bay. “When we started that band there wasn’t much of a hip-hop scene in the Tampa Bay Area and not much of a radio scene either as far as, you know specialty type music, which at the time was rap music.”

Here is a review of FGC’s music:

The Funky Groovy Caterpillars were great. They had one song where the hook involved everyone chanting their name, and another where the hook was “Pass the Gravy.” It was fun, party hip-hop that I believe David Christophere from Rabbit in the Moon had something to do with.

The Funky Groovy Caterpillars was popular and won the Best Rap Funk Act in the Tampa Bay Music Scene. “Yeah, it was a really exciting time… There were a lot of people trying to do a lil’ something, we were part of it and I feel we deserve a part of Tampa Bay History musically.”
 
You can see some other great quotes from this interview Michael did for Coping Block. Michael is pretty funny.

Michael Alexis is a Senior Program Manager at Mozilla Corporation, the company that makes Firefox. Michael also worked with CNET, CBS and Razorfish.

On Michael’s LinkedIn profile he summarizes himself as, “A highly Agile and process-focused Sr. Program Manager with proven track record delivering high-quality, high-impact digital products and experiences.” This summary is backed by experience, Michael is responsible for driving process and projects on Mozilla.org, the flagship Mozilla web property with an average 192,000,000 unique users per month. For perspective, those page views are less than Facebook but more than my site.

 Like Michael Alexis, Michael Alexis is a musician. Michael plays guitar and does vocals for The Wild Kindness, an amplified beat music group. You can see TWK’s collection of music on Soundcloud, and here is a song from their namesake EP:

Cool Tidbit: Michael Alexis found an old version of michaelalexis.com back in 2009 and sent me a quick email to say hello. Here is Michael’s email and my reply (full text follows the image): 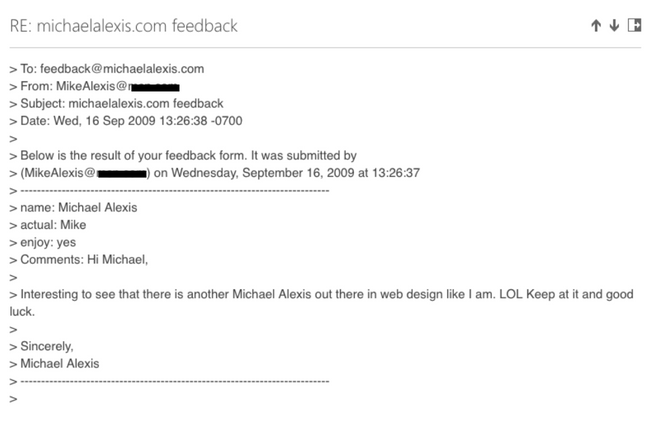 Interesting to see that there is another Michael Alexis out there in web design like I am. LOL. Keep at it and good luck.

I love random, serendipitous moments like this. Here is my reply: 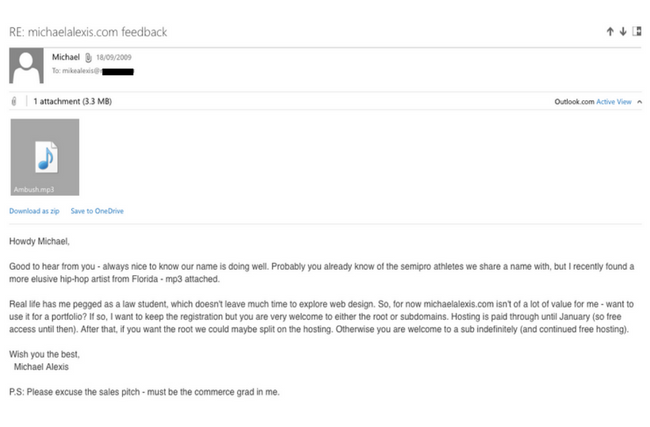 Good to hear from you – always nice to know our name is doing well. Probably you already know of the semipro athletes we share a name with, but I recently found a more elusive hip-hop artist from Florida – mp3 attached.

Real life has me pegged as a law student, which doesn’t leave much time to explore web design. So, for now michaelalexis.com isn’t of a lot of value for me – want to use it for a portfolio? If so, I want to keep the registration but you are very welcome to either the root or subdomains. Hosting is paid through until January (so free access until then). After that, if you want the root we could maybe split on the hosting. Otherwise you are welcome to a sub indefinitely (and continued free hosting).

Wish you the best,

P.S: Please excuse the sales pitch – must be the commerce grad in me.

I used to think having a B.Comm was cool 😀

Seems like Michael Alexis is killing it in his career and hobbies, keep at it and good luck!

There is at least one Michael Alexis in prison or with a long history of incarceration. I don’t think it’s appropriate to profile him here. I am so far removed from the circumstances that lead someone to repeat offences that making light of it in an article like this would be shitty.

Michael Alexis is a Senior Engineer at Exelon Nuclear. Exelon is a large company with dozens of energy plants across the United States.

There isn’t much information about Michael Alexis online, but like Michael Alexis and I, we exchanged some emails. Back in March, 2014, Michael meant to forward a document to himself, but sent it to me instead. Here is the email chain:
  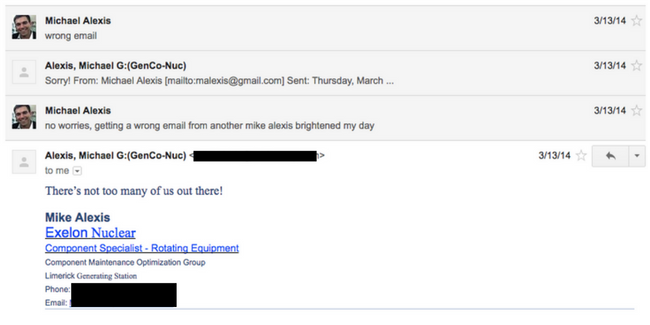 Me: wrong email
Him: Sorry!
Me: no worries, getting a wrong email from another mike alexis brightened my day
Him: There’s not too many of us out there!

You can see from the email that like most Michael Alexises, Michael is friendly and has a good sense of humour. The main difference between us is that Michael likes exclamation points and I shun punctuation altogether. While Michael is right that “there’s not too many of us out there”, this post should show that we aren’t exactly sparse.

I don’t know much about Michael Alexis yet. I found Michael’s barely active Twitter while doing research for this article. Here are some photos: 

Here is an unofficial ranking of how cool we are:

Is There a Better Alternative Than Naming Everyone Michael Alexis?

In a dystopian, engineered future we could all be serial codes. Your name would be an encrypted series that encoded information like your nationality, gender, birthdate and coordinates, blood type and the identity of your parents. There would be a short code prefix for casual use. For example, my number would be 1234-001-02-19850403-435561N-0802533W-A1-7787-2222.

Having a serial code would eliminate all confusion caused by name twins, and allow you to express yourself as a unique individual number. At birth, the United Council of Numbers would assign you a phone number and email address based on your unique serial. This system would eliminate the struggles of getting a 212 area code in NYC, finding an unused username on Gmail and shortening your Facebook URL.

Have you Google’d your name? My colleague searched hers and it was very NSFW.

I challenge you to find your name twins and write a post like this one. When you do; link back to this post, send me yours and I’ll promote it.