My first project that made any money was a website called SaveRally.

I was determined to take that $2000, re-invest it in a website I could “flip” for a quick profit, and then take that money and build something bigger.

SaveRally was that intermediary flip.

Spoiler: I eventually sold SaveRally for $2600 and then quickly built a similar site and sold it for $5600. I had another $50,000+ in sales lined up, but they all fell through because I’m bad at sales.

In 2010, Groupon was THE unicorn startup. The “coupons as a business” craze spawned thousands of copycat sites. Everyone had their niche or angle and SaveRally was mine – I would build a Groupon for students.

My first step was to build an ugly website. I remember hanging out on my brother’s couch, listening to Mixergy and building a demo site on a local server. One of the Mixergy interviews was a live call with Andrew Mason, Groupon’s CEO & Cofounder. Andrew and Andrew were chatting about how Groupon purchased a competitor only to find they should have done better due diligence. I texted in my question, “Why did Groupon buy a fake company?” Basically they were growing fast and making mistakes.

Here are some of the early demo sites I created from the couch:

Notice that I was mucking around with colours instead of actually building a business. I like to tinker because it’s easy, and you learn stuff and it feels productive. The problem is that tinkering is just making 1% adjustments over and over again, when your business needs you to focus on the 80% that actually matters. For SaveRally, nobody gave a shit about the background pattern except for me.

How to Solve The Chicken & Egg Problem: Part 1 “Businesses”

When I was tinkered out, my next step was to solve the Chicken & Egg problem that many online businesses face: I’d get both businesses and consumers committed to my site at the same time.

To get businesses interested, a mentor suggested I ask for advice and not contracts; in hindsight this is some of the best advice I’ve ever received. That day, I cold emailed dozens of businesses saying I was a student starting a business and requesting a coffee meeting to pick their brains. Within a week I had seven of these meetings, and five of those I eventually featured on SaveRally. I also asked for advice from businesses that had been featured on Groupon, my family, friends, professors, etc.

Here are some highlights I remember from the meetings:

As I was having these meetings, I started hustling to apply the advice these mentors gave me. I cold called, cold emailed and cold dropped in to hundreds of businesses near campus. Here is some of what I remember from this outreach:

At the time, incidents like the pizza shop or tea shop would shake me up. But actually, what takes way more mental endurance is continuously reaching out when you hear back from less than 10% of folks. Since then I’ve learned to separate emotion from marketing and instead treat it like a mechanical, analytical process.

Here’s a crappy explainer video I made on Fiverr:

How to Solve the Chicken & Egg Problem: Part 2 “Consumers”

While I was scouting out businesses to feature on SaveRally, I was also trying to drive consumers to sign up for notifications about deals. I considered someone interested if they signed up via the email optin form on SaveRally. I was on a tight budget and was very unsophisticated in marketing, so relied on a couple of random ideas and the help of friends.

My competitors hired students to go around with clipboards and collect email addresses, paying them $1 per email address. That strategy was probably way more effective than my random and less direct methods. All in, I had about 250 email signups after a week of promotion. That’s not a lot, but I thought it was enough to get started with offering deals.

A Masters student saw my marketing materials and called to setup a meeting. Him and some lady were working on a Multi-Level-Marketing approach to group buying. They had an idea and had written an application for a patent they never filed. They wanted me to be their first patsy.

Here are some pictures of my marketing materials: 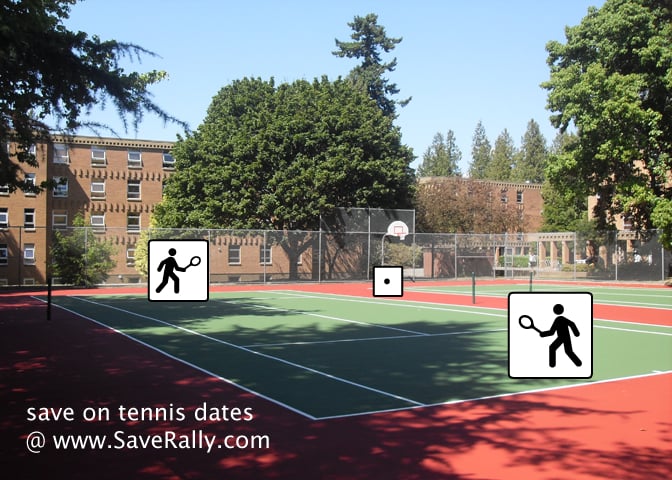 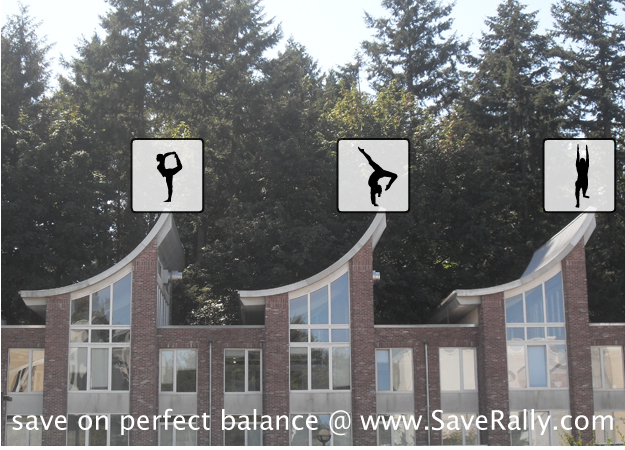 I wasted a bunch of time and money on dumb admin stuff like setting up a corporation, getting a 1-800 number and a fax number. Shout out to my tax law professor for helping with incorporation, which he likely assigned to his Articling Student, so very win-win.

At first I thought I would need to build a custom site to sell deals and fulfill orders. I called up one of my competitors to ask how they built their site, and the guy told me about clone scripts. You can buy clones of Yelp, Monster, Reddit, Twitter, Fiverr, etc. that have most of the same functionality as the original site. There is a market for these clone sites because people like 26 year old me think you can just copy a successful business model without doing any market research. Fools.

For the Groupon clone, options ranged in price from $300 to $1500. One site was offering a subscription-plus model where you pay $99 per month to use the software and then 5% of every transaction that goes through the site.

I ended up choosing a $1000 clone from a company in India that specializes in clone sites, they had one for everything. I chose this version because it seemed to be full featured, had a relatively attractive base design and was fairly “no strings”.

The clone provider installed the site for me, and from day one it didn’t work. I learned PHP so I could try to fix it, and found obvious stuff like “they didn’t connect the site to the database” but there were more nuanced problems that I couldn’t adjust. I discovered they had given me an old version of the software, and when I asked them to update to the current software version they deleted everything, including the database of emails I had collected. I had two contacts at the company, a sales rep and a tech guy. The tech guy wanted me to buy and send him a bunch of iPhone 4s that he would sell before they officially launched in India.

The technical issues delayed my planned launch, so I contacted the clone company’s main help desk for support. They had no record of me, my purchase or registration. 🙁

Here is what I think happened: the sales rep and the tech guy colluded to rip off their company. The sales rep would make the sale to an uninformed consumer, AKA me, and then the tech guy would do the install based on his access to the software.

I had paid for the clone script via Paypal and disputed the charge, “the product or service I bought wasn’t what we agreed to.” I didn’t win the dispute because Paypal doesn’t cover software code, but it definitely put the clone company into stress mode.

I fixed the biggest site issues and launched a week later. 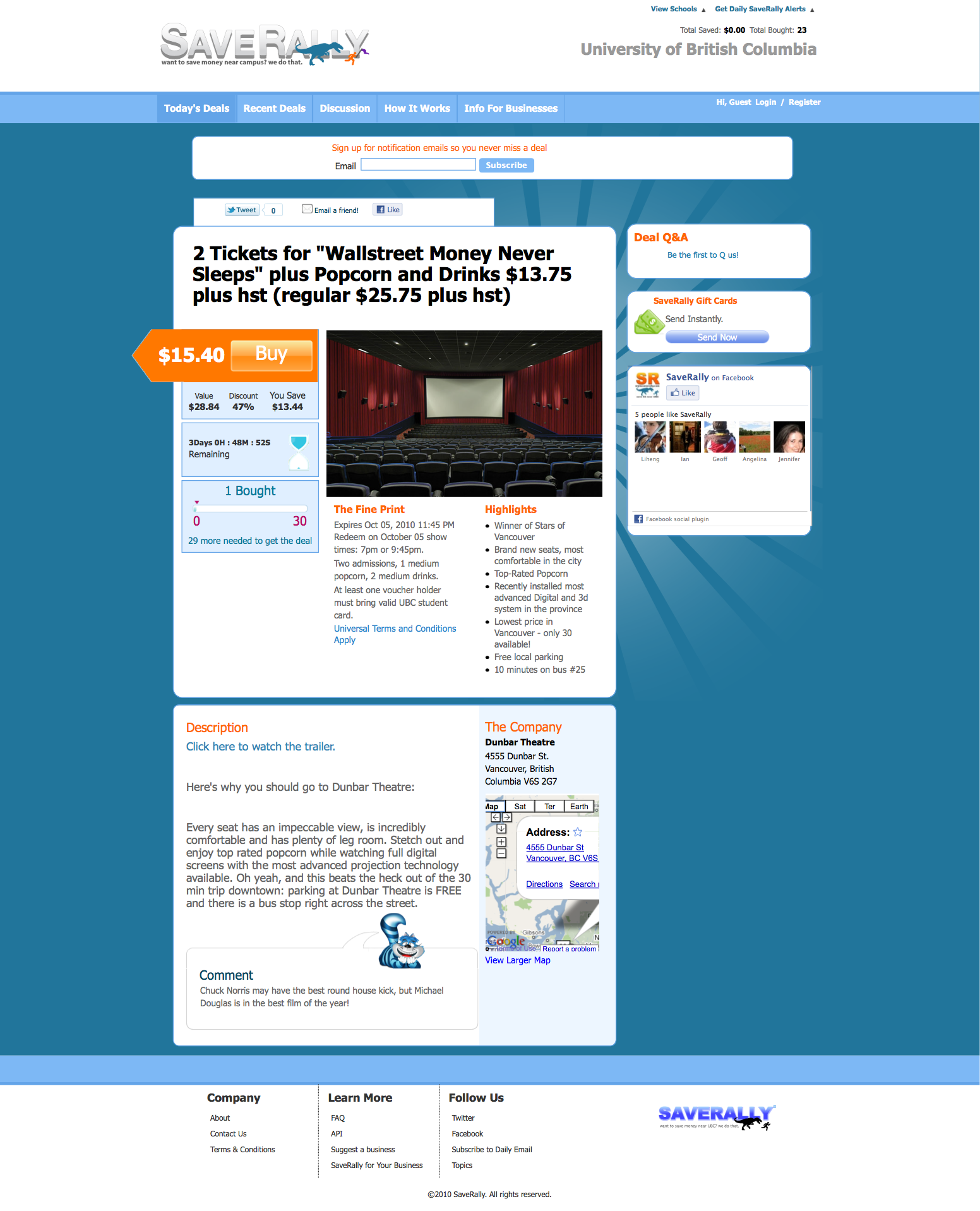 Some friends thought I was brilliant for inventing this business model because they hadn’t heard of Groupon yet. I gave Groupon all the credit.

One classmate bubbled about how she was trying to start rallies – that was cool.

Thank you to Dury for helping with the logo.

The first SaveRally deal went live the first week of classes. Before classes started I was working from morning to night on the code, marketing, etc. Once classes started I gave in to overwhelm, and three weeks later closed the site. I believe it’s possible to be a law student and run a business concurrently, but you have to be smarter than I was and invest in help. You also need to take care of your body, because if you are tired and foggy your productivity drops a lot.

I emailed Andrew Mason, Groupon’s CEO & cofounder to sell him the site for $1. My goal was for Groupon to buy SaveRally so I could say Groupon acquired it.

Andrew didn’t respond to this one, so I posted my SaveRally site for sale on Craigslist and Kijiji. Here’s the ad: 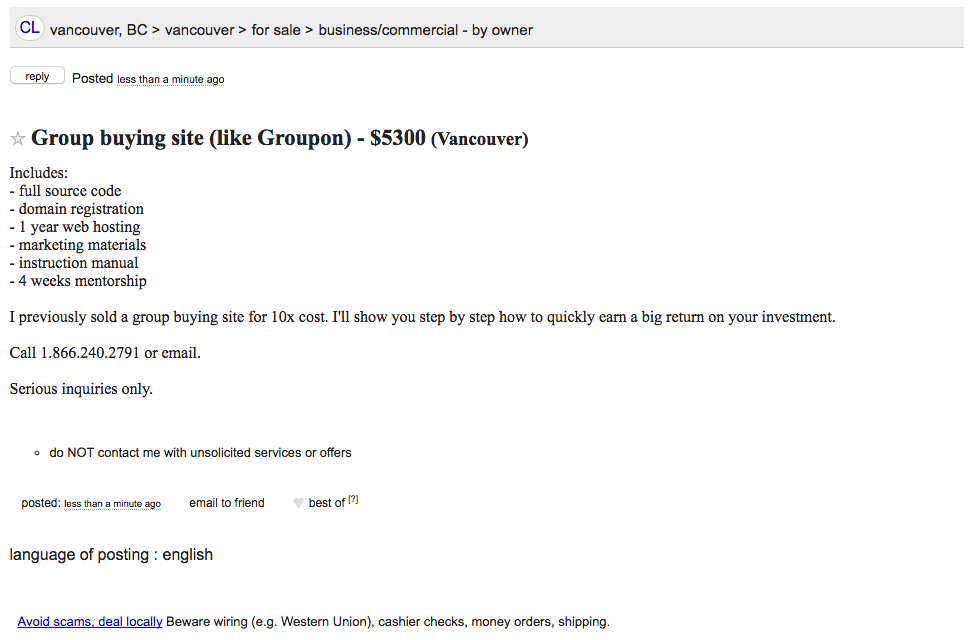 Within one day, a lady contacted me to buy the site. She had a business renting people-sized bubbles that you could float around in. I posted the site for sale for $5300, she countered with $1500 and we agreed on $2600. She bought the site and converted it to a “Groupon for Mexico.”

Building and selling Groupon Clones seemed like easier money than running Groupon Clones, so I posted a similar ad in major cities across North America. Everyone wanted to create a “Groupon of Something”, so I offered a turnkey solution: you get the software, a customized design, instruction manual, marketing plan, web hosting, etc. I listed the sale price as $5600 because I thought it made it look more calculated.

I had a lot of email interest, about 10 phone calls and a couple of in-person meetups. In the end, most of these sales fell through because I told them how HARD it was to actually run this business. One lady who ran a crafts business bought the package for $5600 and made a deals site for Arizona.

An Email That Andrew Mason Did Respond To

I emailed Andrew Mason in 2010 to tell him he’s awesome, and he responded:

What I Learned From This Project

Here are some of the key takeaways I learned from the Groupon Clone business: